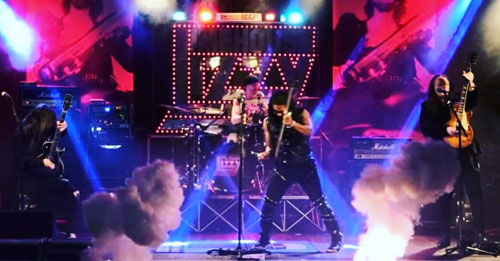 From their official PRS/Billboard award, performing for Virgin Atlantic in Barbados, tv appearances (BBC 2’s ‘Arena’ amongst others), and to being recruited to record and tour by none other than original Thin Lizzy member BRIAN ROBERTSON (Thin Lizzy, Motorhead), Limehouse Lizzy will emerged from the COVID lockdown year with their most explosive show and accomplished line-up yet.

Building on pre-COVID schedules inclusive of previous international tours (USA, UAE, Germany, Scandinavia, Caribbean etc.), corporate clients (Mitsubishi, NatWest) and even book appearances (The Rocker, Send In The Clones, Starstruck), 2022 witnessed the band enjoying their most successful year ever, with an unprecedented 32 sold out appearances!

And now with an immediate 4-show sellout, 2023 shows no signs of letting up on the previous frenetic pace for the band bringing the inimitable, unique and irresistible rock/pop greatest hits homage to Philip Lynott & his band, Thin Lizzy

“entertainment for more than a decade…fantastic live music”

“if you're sceptical about tribute acts, you won't be after seeing Limehouse Lizzy”

"Gig of the week"